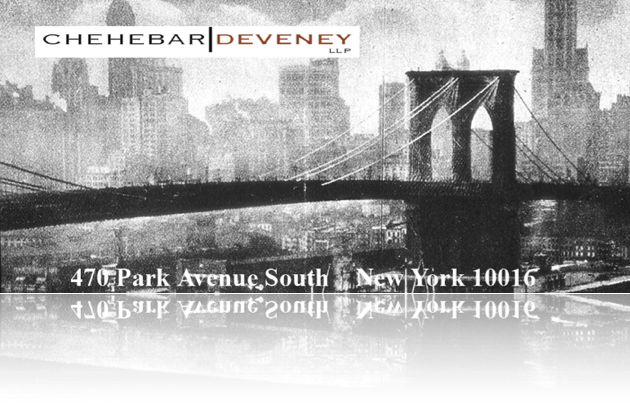 CHARLES CHEHEBAR has extensive experience in real estate transactional and development work, general corporate matters, formation and financing of start-ups, acquisitions and divestitures of private and public companies and corporate reorganization and arbitration, and is frequently retained as a negotiator in complex contract matters.  Mr. Chehebar is an honors graduate of Dartmouth College and the University at Buffalo Law School.  After law school, Mr. Chehebar was associated with Dewey Ballantine and worked principally on general corporate and real estate matters, and commercial litigation.  Mr. Chehebar grew up in Egypt and central Africa and is fluent in French and Arabic.  He is a member of the New York State and American Bar Association.  From 1982 to 2005, Mr. Chehebar was a principal in the firm of Kellner, Chehebar & Deveney in New York City.

John Patrick Deveney attended St. Joseph’s College in Wisconsin and received a Master’s degree in history of religions from the University of Chicago.  He attended the State University of New York at Buffalo Law School, where he was first in his class and an editor of the Law Review and editor-in-chief of The Sea Grant Law Journal.  His article in the latter journal is the definitive treatment of questions involving ownership and use of the “foreshore” in New York and has been repeatedly cited by courts addressing land use adjacent to navigable waters.  Upon graduation, Mr. Deveney was a law clerk for the Hon. Charles L. Brieant, United States District Judge for the Southern District of New York, and then became associated with the firm of Dewey Ballantine, where he was principally involved in product liability litigation.  From June 1980 to August 1982, Mr. Deveney was an Assistant United States Attorney in the Eastern District of Louisiana (New Orleans), where he had an extensive trial practice.  Mr. Deveney specializes in commercial and real estate litigation and is frequently retained by homeowners’ associations, real estate developers, and cooperative and condominium boards in connection with complex real estate transactions. From 1982 to 2005, Mr. Deveney was a principal in the firm of Kellner, Chehebar & Deveney in New York City.

An attorney since 1983, has successfully tried cases in state and federal courts throughout the country. He has litigated cases in a broad range of substantive areas, including contracts, securities, partnership, commercial, entertainment, telecommunications, and constitutional law. As a former Assistant United States Attorney, he also counsels criminal defense clients. In an age in which litigation has become the domain of paper-intensive pre-trial discovery, Mr.McCarthy is a trial lawyer who prides himself on his ability to advocate and win for his clients.

Mr. McCarthy has been a frequent commentator on public policy issues, including
campaign finance reform, health care reform, and fiscal policy, and for six years
served as a member and then as one of the vice-chairs of the New York State
Democratic Committee. A former Democratic nominee for Congress, he has also over
the last 30 years counseled candidates for President, the House and Senate, the state
legislature, the office of Mayor of the City of New York, and other local offices in the
greater metropolitan area.

Those who refuse to study history are condemned to repeat it.

Represents major NYC reals estate owner in connecition with Martin Act investigation by the Attorney General of the State of New York.
Represented same major NYC real estate owner in connection with successful challenge to amendments to state Multiple Dwelling Law which eliminated client’s prior use rights; also represented same owner in suit over ownership of cooperative unit and currently represent owner in defense of claims by City for alleged violations of municipal codes.
Securities

Represented Hollywood creator and producer of multiple prime-time situation comedies in successful defense against contempt charges; obtained dismissal after trial of all claims that client was in contempt of prior judgment declaring him a joint venturer owing to client’s refusal to share interest earned on television residuals.
Environmental

Represented pharmacies and licensed pharmacists in connection with Medicaid fraud claims and other state and federal administrative and criminal investigations and proceedings.
Successfully defended Medicaid health care provider and obtained dismissal of criminal charges of Medicaid fraud brought by Attorney General of the State of New York.
Represented senior public official in connection with U.S. Government’s criminal prosecution of ferry captain for criminal negligence arising out of crash of Staten Island ferry.
Represented former telecommunications executive in connection with successfully negotiated plea to charges brought by U.S. Attorney for Central District of California.
Represented Los Angeles based equipment retailer on forfeiture action brought against client for sale of grey-market goods.
Represented owner of New York farm in obtaining complete dismissal of federal forfeiture proceedings brought in the Southern District of Indiana in the wake of former spouse’s convictions there for wire fraud, money laundering, interstate transportation of stolen funds, and tax evasion, where Government sought forfeiture of the farm as former spouse’s substitute property.
Constitutional

Phi Beta Kappa
Bennett Essay Prize (awarded to senior thesis of outstanding quality in political theory or public law) for honors thesis entitled, “Routines and Objectivity in the News Media: A Functional Perspective”
Colby Prize (awarded to one senior for outstanding overall academic performance as a Government major)
Special Dean’s approved double major in Government and Philosophy, graduated with Highest Distinction in both

Author of Discovery, Democacy and Devotion, essays on law, politics and culture, many of which have also appeared on Huffington Post and Epic Times